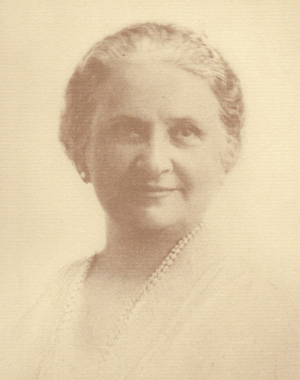 Maria Montessori was a brilliant and determined woman born in Chiaravalle, Italy in 1870. She overcame many societal barriers to become the first female physician in Rome.

While working in a Roman hospital, Dr. Montessori cared for a group of children with special needs. She had no preconceptions about teaching, and relied upon scientific observation to develop her own theories and methods of teaching. These children passed state examinations with scores similar to those of typically developing children.

After this success, Dr. Montessori was eager to try her methods with typically developing children. In 1907, she opened her first Casa dei Bambini (Children’s House) in Rome. She developed her own materials and hired a carpenter to create child-sized furniture and equipment (the first of their kind!). She observed that children had “absorbent minds” and learned through new experiences. She found that children, when engaged in purposeful activity and given a prepared environment, almost taught themselves!

By 1909, Dr. Montessori had begun to train teachers across Europe using her methods. By 1915, there were Montessori schools all over the world.

In 1929, Dr. Montessori founded the Association Montessori Internationale (AMI) to further the research and development of early childhood education. During her life, Dr. Montessori was nominated for the Nobel Peace Prize three times. She believed that peace could be brought about through education.

Dr. Montessori passed away in 1952, leaving a legacy of literature, philosophy and thousands of Montessori schools around the world. It is safe to say that all modern early childhood education has, to some degree, been inspire by the work of Dr. Montessori.